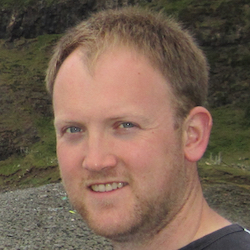 Stuart Reid leads a multidisciplinary team at the University of Strathclyde and is a member of the LIGO Scientific Collaboration.  He was elected Fellow of the Royal Society of Edinburgh (Scotland's national academy), and was elected Chair of the Optics Working group of the LIGO Scientific collaboration - both in 2019.  Since 2002, he has been developing technology for gravitational wave detectors, and in 2013 was co-inventor of "nanokicking", where precise nanoscale vibrations are used to control the behaviour (and fate) of adult stem cells which can be used to grow bone in the lab from a patient's own cells. Reid leads and co-leads two clincal studies of nanokicking, in relation to surgical bone graft for civilian landmine survivors, and in the management or possible treatment of disuse osteoporosis.  His team have also developed novel ECR ion beam deposition technology, alongside developing new crystalline mirror technologies in partnership with Gas Sensing Solution Ltd, which are both relevant for future gravitational wave detectors in addition to a wide array of precision optical/optoelectronic applications.  Reid's team hold the world record for the fabrication of the lowest absorption amorphous silicon thin films (Birney et al., PRL 2018).

Data for: "Control of cell behaviour through nanovibrational stimulation: nanokicking"

Appointed member of the Royal Society's Research Grants Board

Royal Society
Your message has successfully been sent.
Your message was not sent due to an error.
If you made any changes in Pure these will be visible here soon.