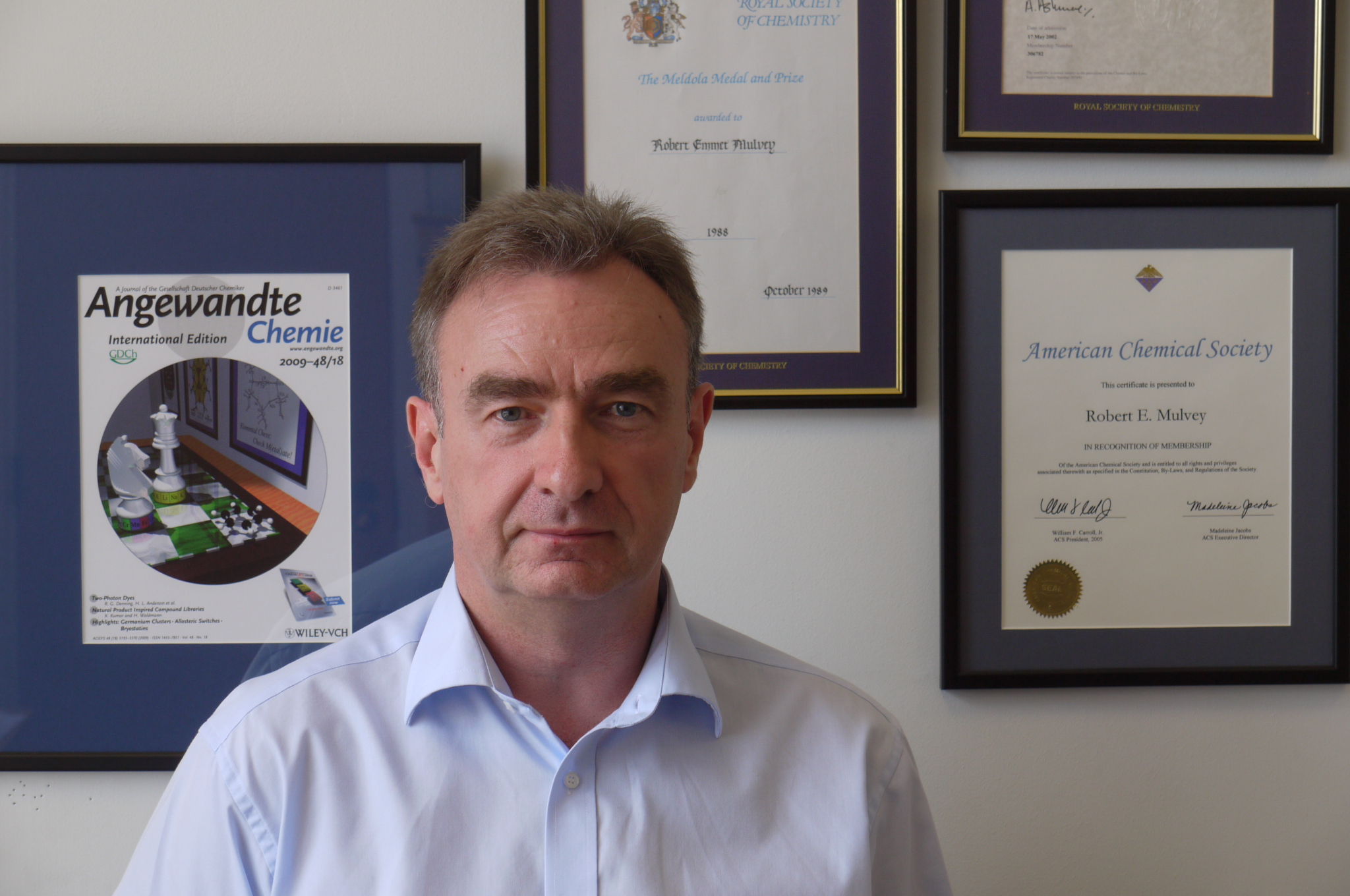 Currently the Mulvey group is developing the special synergistic chemistry that can be created through combining distinct components (mixtures of different metals and different ligands) within the same molecular environment.  Fundamentally it could be said that mixing two distinct metal compounds, for example a lithium amide and a magnesium bisalkyl, produces a heterometallic molecule which acts neither as a lithium nor a magnesium compound but a compound of a unique new metallic element!  Novel chemistry, beyond the scope of conventional homometallic reagents, is the reward. This idea has been applied to metallation chemistry.  Metallation (transforming inert C-H bonds to reactive, useful C-Metal bonds) is one of the most important bond-making tools in chemistry, used routinely in synthetic laboratories worldwide, and increasingly employed from milligram to ton scales in fine chemical and pharmaceutical manufacture.  In alkali-metal-mediated metallation the alkali metal is the catalyst while the formally less reactive metal (for example, magnesium or zinc) executes the deprotonation (low polarity metallation).  Major challenges are to turn stoichiometric metallation reactions into catalytic processes and to invent ways of achieving unusual regioselectivities across a broad range of substrates.

For full free access to the latest paper on his synergistic mixed-metal research done in collaboration with Dr O’Hara and published in the journal Science (on14 November 2014, Issue 6211, Vol. 346, Pages 834-837) please use the links below.

Robert Emmet Mulvey was born in Glasgow, Scotland in 1959.  He received his first degree (BSc. in Chemistry with 1st class Honours) and his Ph.D. (in organolithium chemistry under the direction of Dr Ron Snaith) at the University of Strathclyde in 1981 and 1984 respectively.  Following two years as a postdoctoral fellow at the University of Durham (in the group of Professor Ken Wade), he returned to Strathclyde in 1986 and was promoted to a Professorship in 1995.  To date he has published over 250 research papers and several book chapters.  Exceeding £3M in total as PI, his career research income includes over £2.1M from EPSRC.  A Fellow of the Royal Society of Edinburgh (FRSE), his research on polar organometallic chemistry has won him several awards and prizes as detailed below.  Most recently his work was honoured by the GDCh Arfvedson Schlenk Prize for 2013, awarded for “outstanding achievements in discovering synergistic effects of mixed main group metal compositions”.  Previously on the international advisory board of the ACS journal Organometallics, he joined the editorial board of Chemistry – A European Journal in 2014.

2011   Appointed to the 1919 Chair of Inorganic Chemistry, University of Strathclyde.

1995   Professor and Head of Inorganic Chemistry, University of Strathclyde.

1991   Lecturer in Chemistry, University of Strathclyde.

2002   RSC Main Group Element Award: Given by the Royal Society of Chemistry for “elegant contributions to the metallo-organic and cluster chemistry of the alkali and alkaline earth metals”.

1988   RSC Meldola Medal: Given by the Society of Maccabaeans and the Royal Society of Chemistry in respect of work on the synthesis and characterisation of the unprecedented species of lithium oligomer chemistry.

1984   The Ritchie Prize (1984): Given on the recommendation of the Chairman of the Department of Pure and Applied Chemistry, University of Strathclyde, to the PhD candidate “who presents the thesis which best combines excellence of scientific work with quality of presentation”.

1.  “Synergic sedation of sensitive anions: alkali-mediated zincation of cyclic ethers and ethene”: A. R. Kennedy, J. Klett, R. E. Mulvey, D. S. Wright, Science, 2009, 326, 706.  (This paper demonstrated that zinc reagents generally regarded to be poor bases can exhibit greatly enhanced deprotonating abilities when combined with sodium or potassium and that the sensitive ether or vinyl anions generated by such Zn-H exchanges can be stabilized through co-operative bimetallic bonding).

2.  "Cleave and capture chemistry illustrated through bimetallic-induced fragmentation of tetrahydrofuran”: R. E. Mulvey, V. L. Blair, W. Clegg, A. R. Kennedy, J. Klett, L. Russo,  Nature Chemistry, 2010, 2, 588.  (Opposite to the “sedation” story in the Science paper, switching to a different bimetallic reagent leads to a catastrophic cleavage of THF, breaking 6 of its 13 bonds. All fragments are captured in novel crystalline bimetallic products).