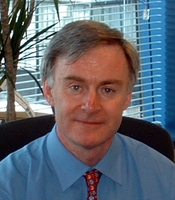 I am an organic chemist and my research group revels in exploring chemical reactivity in synthesis and in biology. We have a particular interest in electron transfer reactions and in radical chemistry, but are generally interested in mechanisms of organic reactions.

Read more about my research group at http://www.johnmurphygroup.com/

I was born in Dublin and educated at Trinity College, Dublin (BA) and the University of Cambridge (PhD). I obtained my DSc in 2002.

I moved to my current position as Merck-Pauson Professor of Chemistry at the University of Strathclyde in 1995.

I was visiting Professor at a number of institutions:

I also was Visiting Fellow to the Australian National University in 1995 and 2007. I held a Royal Society Leverhulme Senior Research Fellowship in 2001.

I was elected Fellow of the Royal Society of Edinburgh (National Academy of  Scotland) in 2001.

I was Director of the Glasgow Centre for Physical Organic Chemistry (GCPOC) 2008-2013.

From August 2006 - August 2008, I was Director of WestCHEM, the newly formed integrated Research School in Chemistry for the West of Scotland.

From 2013-2016, I was Head of Department of Pure and Applied Chemistry

His chemical interests are in mechanistic and synthetic chemistry, in reactive intermediates and in the development of new reactions.

in recognition of my achievements in research and teaching

The citation reads: "Awarded for his highly innovative studies on the preparation, properties and applications of very reactive heterocycles, ranging from extreme electrophiles to super-reducing agents".

The  citation reads: "Awarded for his many highly creative and original contributions to reactivity in organic synthesis, including free radical chemistry, the concept of the radical-polar crossover reaction and electron transfer in the invention of organic super electron reducing agents".

Data for: "N-Silylation of Amines Mediated by the Et3SiH/KOtBu System"

Data for: "Concerted and Stepwise Mechanistic Domain of SNAr Reactions"

An experimental and computational investigation of transition metal-free reactions