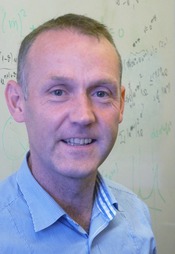 What makes Professor Mackenzie’s recent research stand out is his ability to work on a wide range of interdisciplinary and industrial problems.   Below are just a few of the current projects he is involved with indicating his breadth of research activities.

For the last ten years Professor Mackenzie has been collaborating with Professor Robert Insall from the Beatson Institute for Cancer Research,  on developing computational models of eukaryotic cell migration and chemotaxis.  This subject area has implications in the understanding of important biological processes such as wound healing, embryonic development and cancer metastasis. Key to the success of this collaboration is Professor Mackenzie's assimilation of the biological issues and his innovative use of state of the art numerical modelling techniques. His work in this area has been recognised by the award of a Leverhulme Research Fellowship (£44,000 Oct 2014-2016) to work on "The Mechanisms Behind Cell Migration and Chemotaxis: Disection using Computational Modelling"  He is also currently  supervising an EPSRC funded industrial CASE PhD student (£98,294) which is partially funded by the CRUK. Dr Mackenzie is also a member of the Research in Cancer at Strathclyde (RICAS) group which is a component of the Health Technologies theme of the University’s Technology and Innovation Centre.

Professor Mackenzie has also recently applied his knowledge of the adaptive solution of partial differential equations to the solution of mathematical models of liquid crystals. This work is funded by an EPSRC Maths CASE award with Hewlett-Packard (£90,298). These devices have the potential for significant reductions in energy consumption and in the production of reflective colour e-inks systems.

Professor Mackenzie is also working with Professor Andrew Mills at Queens University, Belfast. This work is funded through an EPSRC DTA studentship (£67,000),  investigating the kinetics of photocatalytic activated intelligent ink systems.  These inks have been used to detect rapidly the photocatalytic activity of self-cleaning glass and in the detection of oxygen in modified atmosphere packaging used in the food industry.  These systems are not well understood, being a complex combination of diffusion through thin polymer films and photocatalytic activation control.  His current research is focussed on the use of a combination of mathematical and computational models which is leading to a greater understanding of the key limiting factors – in terms of kinetics- of such systems and this information will be used to produce faster acting indicators with the potential for greater commercial impact.

Recently Professor Mackenzie was involved with a KTN industrial internship funded by Proctor and Gamble investigating the mathematical modelling of spray drying towers. This process is used to produce detergents and other comsumer products and their design and operation are poorly understood. The successful outcome from the internship led to Proctor and Gamble funding an EPSRC Industrial CASE studentship (£91,296).  Dr Mackenzie’s team are constructing a validated computational model for the complex processes of droplet transport, evaporation and allomeration in spray drying towers.

Doctor of Philosophy, University of Oxford

Bachelor of Science, UNIVERSITY OF STRATHCLYDE

An hr-adaptive method for the cubic nonlinear Schrödinger equation