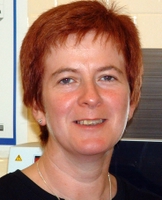 Christine Davidson's research is in the area of environmental analytical chemistry, especially the development of new analytical methods to assess risk to human health and the environment from priority pollutants either directly or through the food chain. Recent studies have focused on chemical speciation analysis of potentially toxic elements (e.g. As, Cd, Cr, Cu, Fe, Hg, Mn, Ni, Pb, Sn, Zn); the study of urban soils and inhalable airborne particles, contaminated land, sediments and waters; and on development of simple colorimetric methods for carrying out analysis in the field. She also works on persistent organic pollutants such as polycyclic aromatic hydrocarbons.

Christine Davidson recevied her BSc (Hons, 1st class) from the University of Glasgow in 1983 and then moved to the Department of Physics and Astronomy to carry out a PhD in laser ionisation spectroscopy. She had two postdoctoral appointments, the first at the State University of Utrecht, Netherlands, where she worked on accelerator mass spectrometry, and the second at the Scottish Universities Research and Reactor Centre, studying natural analogues for nuclear waste repositories. Christine was appointed to the staff at the University of Strathclyde in 1989 and promoted to senior lecturer in 1999.

An investigation of the distribution, fractionation and bioaccessibility of potentially toxic elements in urban soils of Lagos, Nigeria